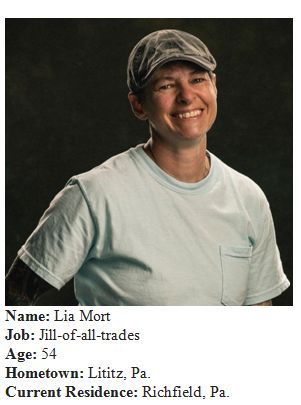 Season Three of the CBS show “Tough As Nails” premiered last week and it had a local touch. Richfield’s Lia Mort is one of 12 contestants competing for $200,000 and a new Ford truck! And get what said on the first episode: “If I do win, I would hope that I’d take the money, and the truck, and use it to help others.”

Lia does walking trail tours on her hobby farm, which has a horse, alpacas, “too many donkeys” and a goat.

On last week’s season-opener, Lia actually won the very first challenge and, by doing so, became a team captain! If you missed that episode, don’t worry, you can watch it at the bottom of this page.

“Tough As Nails” airs Wednesdays at 9 p.m., so set that DVR now. unlike a lot of competition shows, contestants get to continue competing week after week.

Wake up with the Merf Morning Show, weekdays from 5 til 10

TOUGH AS NAILS is a competition series that celebrates everyday Americans who consider the calluses on their hands a badge of honor. Competitors will be tested for their strength, endurance, agility and mental toughness in challenges that take place in the real world. One by one, they will be eliminated until the TOUGH AS NAILS winner is
named, but nobody will go home. Even after they “punch out” of the individual competition, they will have the opportunity to win additional prizes in the team competitions that continue throughout the season. The series will redefine what it means to be tough, proving that it comes in all shapes and sizes. The show airs Wednesdays at 9 p.m. on the CBS Television Network, and available to stream live and on demand on the CBS app and Paramount+.